It all started on 15 October 2016 with a simple question of a friend of mine “Hi Len, is triathlon something for you?”…

The question came out of nowhere but to be honest, I had been thinking about a triathlon before. Well, many years before this question was asked and I never took action. I’ve always been sporting since I was young. Playing field hockey, tennis, running, mountain biking, skiing and snowboarding. His plan was to register for the Ironman 70.3 race in Zell am See, Austria.

At that time I was living in Innsbruck, Austria so that couldn’t be a reason to decline… Zell am See is just 2 hours away by car so that would almost be a home race! Not knowing what kind of distances the Ironman 70.3 consisted of, I had to look this up but I was tempted and challenged! 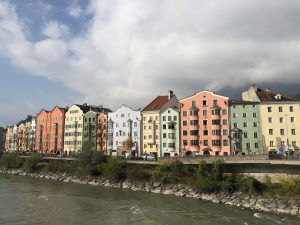 On 18 October 2016, so 3 days later, we both registered for the race! The race would take place on 27 August 2017, which meant we had 10 months to train! We spoke some more about the 3 sports (swimming, cycling, running) and set our goal to at least finish and try to finish under 6 hours. My friend had a little bit of experience in other kinds of triathlons (olympic distances with a mountainbike) but all the trainings were very new to me.

I haven’t really been swimming since I was a little kid (on vacation just playing in the water, no real distance swimming) and the freestyle wasn’t really something that I had a lot of confidence in. The cycling was a nice challenge as well since I owned a mountainbike but had never been on a road bike before. Only the running of half a marathon I felt quite confident about since I have been running and playing field hockey for many years. I’ve only done a few running races (10 Miles and half marathons) and the last one was quite some years ago already.

Since I’m working offshore on a research vessel (actually this whole conversation and also registering I was working offshore) my trainings would be a bit restricted and not consistent for the whole 10 months period. Normally I was working for 4-6 weeks and would be free at home for the next 4-6 weeks. On board my trainings would be limited since I was working at least 12 hours a day and the gym was very minimalistic. There was a ‘not-ideal’ home trainer and some weights. Ah, and an elliptical trainer but I’m too tall for it (would bump my head to the ceiling every step). 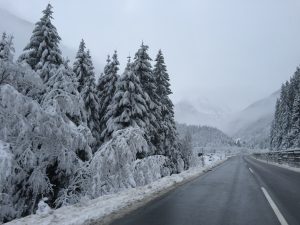 Since winter in Austria is normally pretty miserable (cold, snow, rain, freezing temperatures) for triathlon trainings outside, the moment I came off my vessel I went to find an indoor swimming pool. There was actually one nearby with a 25 meters pool. The first few weeks, I was swimming a few times per week and combining the breaststroke with freestyle as good as I could. In the beginning I couldn’t even do 25 meters of freestyle… This was going to be a nice challenge… Running outside was going quite ok and slowly was getting in a shape again. I also got a Canyon road bike (Endurance CF 9.0 SL with Shimano Dura-Ace group set) and had my first road bike experiences. In winter so fully clothed with winter pants, jacket, undershirts, gloves, overshoes. Must have a been a funny sight… Next to the triathlon training, I was still enjoying the winter climate by going skiing and ski touring. 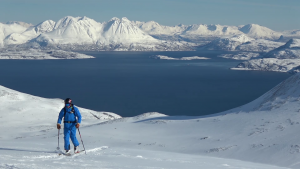 In March 2017, after a few more projects working on the vessel, I finally found a swim trainer in Innsbruck that could teach me freestyle! I booked private lessons, one 45 minutes lesson per week for the time that I would be at home.

Together with my friend, who lives in The Netherlands and was training a lot more already, we registered for an Olympic Distance triathlon in Zeewolde, the Netherlands. The race would be in June, so that would a be nice try-out to see what was going on in a triathlon race and how to change between the 3 sports and so. 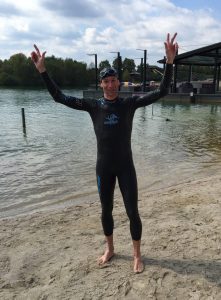 After a new Canyon road bike, new running shoes, and more gear and gadgets, it was time to look into a wetsuit. Yeah, triathlon isn’t a cheap sport! Luckily there was a wetsuit test day end of April 2017, which was organised by a large Dutch triathlon shop. During this test day I could try out several brands and models of each brand. Of course the conditions in Holland at that day weren’t great… Just above freezing temperatures! Crazy, thinking of going for a swim in the nearby lake… After having enough motivation to try a couple out, I decided to buy the one that felt the best (Sailfish One). Made my payment and the wetsuit would be sent to my home address within a few days. In their nearby shop I found some good bargains for trisuits and other accessoires so bought them as well. Successful day!

The start in our category (individuals men) was a mass-start and that was interesting… I tried to stay out of the way from everyone and trying to survive the swimming of 1.5 km. After 38 minutes I came out of the water (barely alive) and ran to the transition zone. Put on my shoes and ran to the cycling start line. The 40 km cycling didn’t go fantastic but survived at least (1 hour 14 minutes) and the 10 km run was a lot tougher than I was expecting (47 minutes!) so my overall finish time was 2 hours 43 minutes. My friend had a lot better race and finished in 2 hours 30 minutes. Ok, that was an interesting first triathlon race for me… Luckily I didn’t finish last in my age group 😉 Barely, but I came in as 14th out of 17 athletes in my age group. This was my first triathlon, so I can formally call myself a triathlete now 🙂 But there is a lot to learn and improve for the real race: Ironman 70.3 Zell am See. And that’s for another post!