Sunday 7 July 2019: Ironman 5150 Hoorn West-Friesland! The first Ironman race in The Netherlands that I would compete in. The first Ironman event in Hoorn and the organisation had some promising ideas for the future. Possibly an Ironman 70.3 Hoorn next year and maybe even bringing back the full distance Ironman in a few years time? That would be really cool but first this Ironman 5150 which is the Ironman name for an Olympic Distance length, so this would mean: 1.5 km swimming, 40 km bike ride and 10 km run.

Early in the morning, I drove from my home to the city Hoorn which was just a 45 minutes drive and parked my car on a carpark in the center. There was still quite a lot of space when I arrived but I did see a lot of other athletes taking their bikes out of their cars, assembling them and preparing themselves. I decided to go to the registration desk first to get my start number, stickers, transition zone (blue, red and white) bags, and an Ironman 5150 Hoorn backpack. The organisation was not that well-oiled as my previous Ironman races but everything was sorted out reasonably quickly. After getting all my stuff and a quick look at the swim start and finish area, I walked back to my car to assemble my bike and get everything ready. In the meantime my Ironman friend arrived as well and he went to the registration desk to pick up his stuff. Apparently the line was already a lot longer and it took some time before he was back at the cars.

My bike was ready, water bottles with energy drink on the bike and in the transition zone bags, together with my running shoes, cap, sunnies etc. All ready and time to go to the park fermee to checkin the bikes. The bike park was pretty small and had quite a lot of bikes. Luckily my bike was on the outside of all the racks so easy to be found and not so crowded. Of course the bike rack was too low (as I always have, am I really riding with such a high saddle?) and I parked my bike with the handlebar on the rack instead. Same idea, just have to remember how to get my bike out 🙂 Clicked my shoes in the Shimano peddles and attached the elastic strings so I could do my fantastic flying mount again! We met some other friends that were competing in a triathlon race for the first time, and we provided some tips and answered some questions. After all the preparations in the bike park, it was time to get my timing chip and head to the swim start. The timing chip queue was pretty long and took quite some time while some athletes were starting to be impatient. 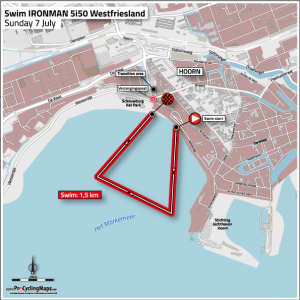 At the swim start it was clear that there wasn’t really a possibility for a warming up so instead a short standing warming up was done. Not the best preparation for a race but better than nothing at all. A good queue was forming on the dike to the swim start so at least lots of athletes were competing today! 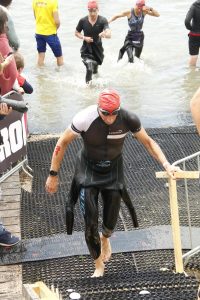 The canon of the old wooded ship from the Golden Age of Holland, a bit further in the bay, was shot and that was the start signal for the pros. Directly after them the rest was starting. Unfortunately not in the best organised way since it was just first come, first served instead of organised on estimated swim times. The start was still a typical Ironman rolling start with only a few athletes every couple of seconds. What we saw when the first were starting that the beginning of the swim route was apparently very shallow. So many that were just walking until the first buoy or trying to make some dolphin jumps or half freestyle swimming. What was this? I’ve never seen something like this for such a long distance. Most of them were walking at least 100m through the water…

But then it was start time for me: 3, 2, 1, GO! A few steps to the water and then jumping in the water. I was first trying to make some dolphin jumps to speed up and not having to walk but that was just too exhausting. Then half freestyle and half dolphin until it was deep enough to continue with my normal freestyle swimming. Man that was a bit ridiculous… Anyway the swim was supposed to be quite straightforward with 2 buoys to turn to the right which led back to the dike. 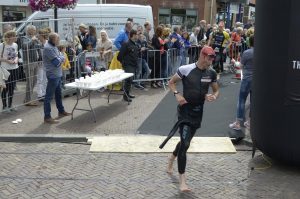 Since the start wasn’t planned based on swim times, there were so many breaststroke swimmer in front of me. This was quite annoying since the speed difference is just too big and the breaststroke technique is so much wider than the freestyle technique making it more difficult to overtake with so many swimmers trying to squeeze around the buoys and further down the swim route. I completed the 1500m swim and made it out of the water in 27 minutes and 18 seconds (average of 1:50/100m) which is good for place 22 in my age group and 120 overall. 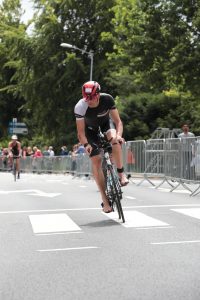 Running to the transition zone, I heard someone shouting my name and saw my coach Ruud among the visitors! That was a nice motivation to run and go through T1 even faster! Quickly grabbing my Blue bag and throw in my wetsuit and on to my bike. With my bike on my hand to the exit of the transition zone and with a super flying mount technique I was on my bike. Transition 1 time: 2 minutes 39 seconds. Ready for the 40 kilometers bike route! First through the city and quite quickly on the typical Dutch dike that protects the farmland and towns from the water. 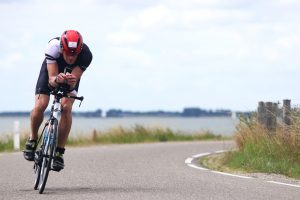 The dike section was pretty long and I had a good speed so I was overtaking many other athletes along the way. After about 20 km the route went further through the polders of West-Friesland and through some towns. I noticed that some sections of the route were last-minute changed since the test ride a week ago was different. 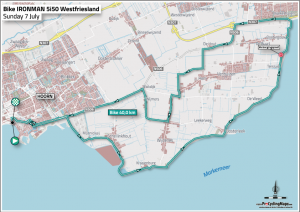 There were some parts of the bike route that were a bit windy but in general it was quite a good day! Of course, if the wind would be blowing from the northeast, the dike road would be completely different!

But not today! Still hammering on through the polders and then back on the road towards Hoorn. The last couple of kilometers was through the old roads in Hoorn again, some cobblestones and narrow turns. Just before the transition zone, I took my feet out of my shoes and was ready for my flying dismount. The dismount went without any issue and quickly had my bike racked. 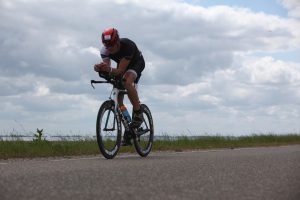 My bike time for the 40 km was 1 hour 1 minutes and 41 seconds. Just less than 40 kmh average! Next time I have to give a little bit more power to make the average of 40 kmh 🙂 But this bike time was already a really good result for me! In my age group, I ranked place 6 and overall place 31!!! No wonder that I was overtaking quite some competitors!

After racking my bike, taking my Red bag and slipping into my running shoes, I was super fast flying through the transition T2 in 1 minute 12 seconds. No time to loose, on to running the 10k. The running route was a 2-loop course taking us through the pedestrian-only shopping street first, then through some old streets of Hoorn, a city park, along the marina, passing the swim start/finish on the city dike (where my parents were standing to watch and support me on loop 1) and then the last section past the transition and through the shopping street again. 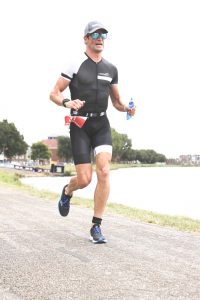 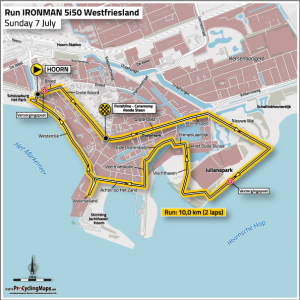 During the first loop there weren’t that many runners yet and the directions weren’t all too clear everywhere. Very limited amount of volunteers and blocking tape to direct the runners the correct way, especially in the park and around the marina. Coming towards the finish I saw somebody from the organisation and quickly informed him about the lack of directions in the park. Unfortunately this couldn’t be solved very quickly and this showed during the second loop when I suddenly saw many runners coming from wrong directions in the city park. They were all very surprised and had no clue where to go.

I kept going and after the final stretch over the dike, I still had some energy left and could sprint the last kilometer through the shopping street (under 4:00/1km) past my watching parents that had moved from the city dike to the last part of the shopping street, then I had to do a left turn for the final few meters to the finish line! The 10 km run I completed in 41 minutes and 54 seconds, resulting in place 7 in my age group and 26 overall. This is pretty ok, haha! 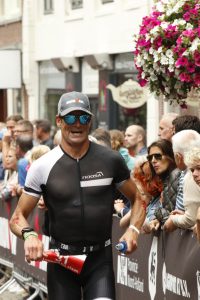 My total time for the Ironman 5150 Hoorn West-Friesland was 2 hours 14 minutes and 44 seconds! A good performance I’d say, which resulted in a 7th place of 89 athletes in my age group ranking and 26th place of 655 competitors overall.

At the finish area, there were some drinks and fruits and I met my parents again that were watching the race on different locations in Hoorn. That’s also the advantage of this race, the visitors can easily walk from watching the swimming to where the bike route passes and then further to the running route and finish line. It’s all quite compact. 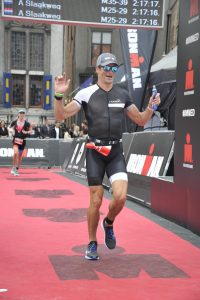 After some chatting to other athletes, my friends that were finishing as well and a quick massage, it was time to pick up my bike and transition bags and drive back home. It was a good race and I enjoyed competing in this one very much. Nice to see quite a lot of familiar Dutch triathlon athletes competing and afterwards in the finish area.

I know there is still some good progress to make! I’m not there yet 😀 Especially the swimming should become a lot better in the next year. I’m pretty happy with the cycling and running, although I think I should be able to run faster! Even after the other two sports, I would like to train and become faster on the run part.

Anyway, the next day was an easy endurance run on the program but directly thereafter for the following 3 weeks were all kinds of trainings planned. Not a week of easy recovery for me! Long endurance bike&run, intervals on the bike and running and progressive run trainings. Besides these, of course a nice number of swim sessions and swim trainings again. Within no-time, I had to prepare my travel bag with sport&tri gear, nutrition and normal clothes, and disassembled my triathlon bike into the bike suitcase. Ready for the international train ride to London! In a few days time, the next tri race was on my program: London Westminster Olympic Distance triathlon!