The cancellation of the Ironman 70.3 West-Friesland triathlon was really unexpected and demotivating at least but luckily I had found a substitute triathlon race: the Olympic Distance Ironman 5150 Maastricht Limburg. My last blog post ended with only a week to go and on Thursday before the race, I drove to the south-east of the Netherlands. Just outside the center of the city of Maastricht, I had booked a hotel for a few days. Arriving in Maastricht, I drove directly to the transition area of the event and I saw the Ironman team building up the venue. The relocated transition area was situated just south and outside Maastricht city, all due to the current Coronavirus situation and the difficulty to organize a race right through a busy city center with all its terraces, tourists, and other spectators. Only the bike route was somewhat going through the east side of the city, all the rest was outside Maastricht and going through the country roads and little villages. 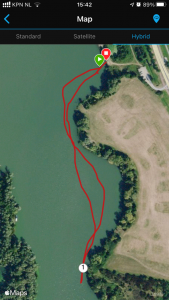 The temperature was still very nice with a bright blue sky but quite windy. I went for a practice swim in the river Maas and experienced a decent current and pretty high waves due to the strong wind. After the swim, I drove to the hotel to check-in and bring my bike and all my bags to the room. I had a spacious hotel room, with a large double bed and a good bathroom.

The next day the weather had changed a lot! As predicted from Friday until Monday the weather would be cold, a lot of rain, and a lot of wind. On Friday morning it was supposed to stay dry and although it was a bit chilly, I went for a bike ride to explore the Ironman 5150 Maastricht bike route. About halfway it started to rain and a bit later pouring freezing cold rain came down making me completely soaked and freezing cold… Well, at least I had cycled the route once and experienced these weather conditions in the ‘mountains’ of the Netherlands… I just hoped it wouldn’t be too bad on Sunday!

After coming back to the hotel and taking a long shower, I changed my rear wheel from disc to high rim carbon. There was something wrong with the disc wheel and on this route, I didn’t think the disc would be a crazy advantage for me. At least the high rim carbon was perfect and I’ve never had any issues ever since this wheel was swapped out by Edco when I was in Switzerland for the Ironman 70.3 Rapperswil-Jona triathlon. Together with cleaning my bike on a towel in the hotel room, and lubricating the chain, the Cervelo P3 triathlon bike was almost ready for the race.

The rest of the day I spend my time exploring the city of Maastricht and having a nice Italian dinner in the city center. Maastricht is actually a very pretty and old city and I would certainly recommend visiting this area of the Netherlands if you’re nearby. 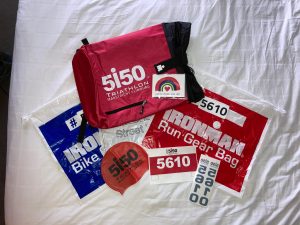 Saturday was my rest day which I spend mostly as a tourist in the city center again. Late afternoon, I went to the transition area to register myself, pick up the Ironman backpack with all the necessary things like start number, and sticker sheet. I also checked out the transition area itself, the routes after the swim and bike-out, bike-in, and run-out. The more you have familiarized yourself with the routes, the easier it will be on race day!

Getting up early to eat a warmed up pasta meal in my room and to put my bike in the car together with the necessary gear and drinking bidons. I arrived on site quite early seeing there were just a handful of other cars in the car park. Making my bike race-ready, filling my handlebar bidon with Nutrid Kerosine energy drink and arranging my blue and red transition bags, and headed over to the transition area to check-in. It had rained an awful lot on Saturday night and I was happy that I didn’t check-in my bike on Saturday actually. On Sunday morning the weather was actually not even too bad: at least it was dry, not too much wind, and about 13 degrees Celsius. The forecast stated that maybe even the sun would come out! 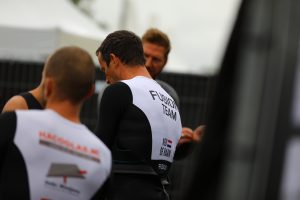 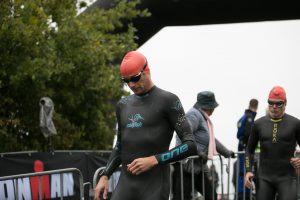 The group of athletes at the swim start was starting to grow but it was still too early to get in line. I went to the side of the transition area, to the riverbank, and had a quick chat with one of the Ironman organizers. We both were very relieved that this race could go through, especially after the cancellation of the other Ironman Netherlands race, the Ironman 70.3 West-Friesland. At the riverbank, I watched the start of the Pro men’s and Pro women’s races, and then it was time to get in line for my swim start! 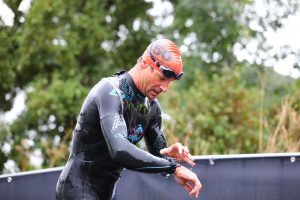 After the start of the first Age Group athletes, it didn’t take long before I was in the water! Yes, the water wasn’t overly warm but at least it wasn’t freezing cold as well (approx 19 degrees Celsius), and my swim start was pretty fine actually. The first section was across the current, then through the two red buoys, and left against the current. This was a long section and was pretty tough. Then two right turns and the long stretch back and then the final turn to the swim exit. Getting out of the water and while I was running to the changing area, I unzipped my wetsuit and took down the top part. My swim time wasn’t overly fast, it took me 28m35s which is an average of 1:54/100m for the 1500m swim part. 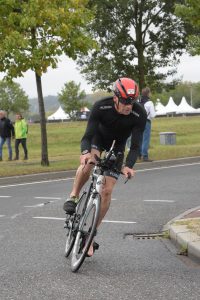 During Transition 1, to change to the bike part, I struggled to put on my Fusion bike jacket which did cost me quite some time. My wet arms were stuck in the sleeves of the jacket and I was really annoyed that I couldn’t get in. The temperature wasn’t really high, only about 13-14 degrees, and with the little bit of wind, I didn’t want to get really cold on the bike and starting to shiver, loose energy, and have a terrible bike ride. As you might understand, I don’t really like cold water or cold temperatures in general (except when I’m on skis!) T1 took me exactly 4 minutes, which is at least 1 minute too much! Even considering putting on a jacket… 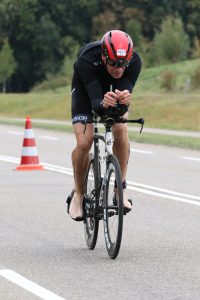 That said, during the bike ride I was nice and warm and could really concentrate on hammering as much as possible. The bike ride did go pretty well although the route isn’t ideal with all the narrow streets, many sharp turns, and bumps in the road. There was one long climb which I paced nicely and hammered down on the descent. The rest of the route was mostly hilly and I was overtaking quite some other athletes along the way. The roads were still a bit wet and with the leaves sometimes a bit slippery. Only the last section of the bike ride, from Maastricht back to the transition area, the route was pretty straight but then it was time to prepare for the run. I completed the bike part in 1h05m52s which meant an average for the 40 km of 36.44 km/h. Considering the narrow and wet roads, many turns, and the climb, I’m quite happy with this average. 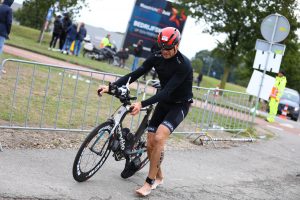 My transition from bike to run went smooth and fast, and quickly I was off for the 10 km run! The run route was firstly going south along the river to the town Eijsden, then back to the north through the town Oost-Maarland and through the industrial area, and the final stretch back to the finish. I was trying to stay close to some other fast runners but that was tough. Although I could overtake a few more athletes and I was overtaken by just a couple of faster runners. 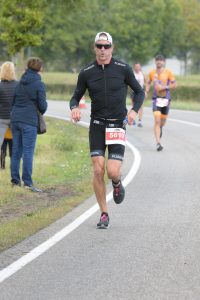 The last kilometer I managed to speed up and push the last bit of energy to my legs. Unfortunately, a few hundred meters before the finish, just after the corner from the street to the grass, another athlete that was just starting his run crashed into me since he was running on the wrong side of the track… This shocked me for a few seconds and I ended up with a painful shoulder. After the few seconds, I managed to continue the run and cross the finish line with a smile 🙂 I completed the run in 41m01s, about 4:15/1km average. 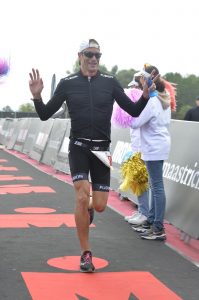 The total time for this Olympic Distance triathlon was: 2h21m49s, rank 4 in my age group.

While recovering in the athlete’s garden with some cookies, energy drinks, and fruits, I checked the times of other athletes in my age group…

I had finished in rank 4, but the difference with rank 3 was not even 10 seconds! Although I have to accept this, I was so close to finally finish on the podium in an Ironman race… If only I didn’t lose the time in T1 or the few seconds on the run just before the finish… Anyway, I’m very happy with the performance and even better motivation to push harder next time and grab my first trophy! Well, besides my WIN of the Terriers triathlon in 2019 of course 🙂 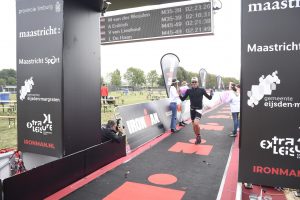 For the rest of the year, I don’t have any other races scheduled. I’ll make my plans for 2021 soon! Like many other triathletes this year, I have two Ironman races that were canceled and postponed to 2021… Ironman 70.3 Subic Bay in the Philippines and Ironman 70.3 West-Friesland in the Netherlands.

And of course, I’ll keep on training! I’ll continue in the endless pool of Tri2One where I’m making good progress on my swimming technique, and soon I’ll sit down with my coach to discuss this season, make plans for next year, and how to tackle the winter period.

One thing is clear: plan for next year is that I will be stronger and faster because I want my first Ironman trophy 😀 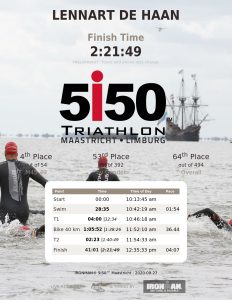