Race Report: About a week before the Ironman 70.3 Elsinore race I drove from my home in The Netherlands to Puttgarden in Germany, where I took the ferry to Rødby in Denmark. From the ferry I drove north, past the capital Kopenhagen to Helsingor. I had booked a spacious but simple apartment just outside the town center. My apartment was on the ground floor and had a little terras with some chairs and a table. 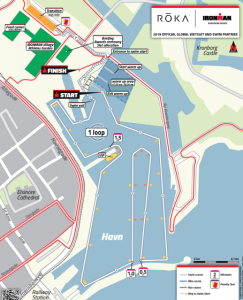 The apartment was just about 100m from the beach and perfect for the few swim trainings that were still on my program. The bike route was passing the accommodation so it was easy to plan my bike trainings on the IM 70.3 bike route. During one of the bike trainings I complete the big loop and started with the short loop before returning to the apartment. And during another bike training I completed the small loop and made a start with the big loop. So I had explored the whole bike route and knew more or less what to expect during the race. I did a couple of run trainings of which I run a part of the route once but the rest I just ran along the straight section of the bike route that was going past the water Oresund. 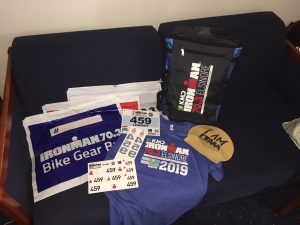 Since I was staying in an apartment, I could prepare my own food so at least I could eat what I was used to back home. Lots of dairy products, pastas, veggies, and chicken. No unhealthy hotel food. This was very convenient and felt a lot more relaxing than staying in a hotel or BnB. The apartment was part of a large apartment building but had no reception and only electric keypad locks, which also meant that I had no issues taking my bike into my room and cleaning it on the terras. 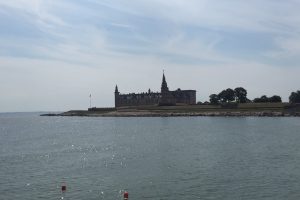 The town was pretty nice actually. A large marina, the castle Kronborg (Hamlet’s castle, which you can visit), a couple of supermarkets, and a cosy center with lots of restaurant and little cafes in the pedestrian-only area. And some museums for the interested visitors (sorry didn’t do that).

The Danish style houses were cool to see. As well as some narrow alleyways in the center, and some houses and walls with street paintings. 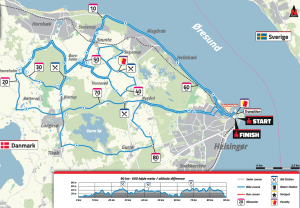 The swim course was in the harbour of Helsingor and had a little bit chaotic layout! From the start you’ll have to follow the quayside, then cross the harbour opening, around a buoy, swim back toward the castle, around a buoy to where you just came from, along another quayside, turn and along more quayside, around a ship with VIPs, some other strange route and then finally back to the start area where the swim exit was… 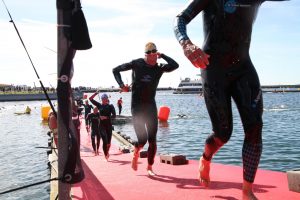 Anyway, the swim start of the Pros was impressive again. They had a start from the water and the speed they took off was cool to see. After them, the age groupers were starting in the typical Ironman rolling-start method but we were starting from the swim pontoon and we had to go down the stairs for an easy and save access to the water 😉 No jumping in the water was allowed. The swim was quite hectic with the amount of turning points and at a certain moment I had a few swimmers coming towards me at the wrong side. They went too far out of the route so they came into the route of the others swimmers. It was great to see so many enthusiastic people on the quayside that were cheering and watching. The swim took me 35 minutes 47 seconds, which is pretty fast for me! Looking back I’m certainly happy with this time, and of course the wetsuit helped me. This time resulted in place number 115 in my age group and place 870 overall for the swim section. 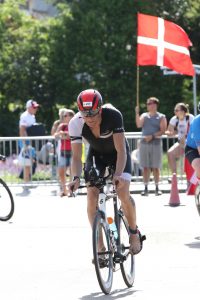 The run to the transition zone was quite long, taking my Blue bag of the rack and throw in my wetsuit and put on my helmet. Run to my bike and all together it took me 5 minutes and 9 seconds before I was underway on my bike! During the Brouwersdam 90 race (just 4 weeks before) I tried my first flying bike mount and that went well, so I was feeling even more confident during this race. The bike route was just like the swim route a bit chaotic. Well, at least when you look at the map with all its planned turns, little loops, 180 degrees turn around on the same street, but in the end it’s pretty simple: first along the water and do one big loop, then back along the water again to Helsingor and then go for a shorter loop again. 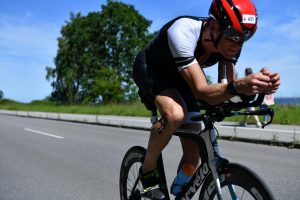 Total of 90 km and during the race it was very well marked and guided by volunteers. Especially the volunteers did a fantastic job of directing everybody to the correct direction. There was no junction that I didn’t know what was the correct route since everything was clearly marked and directed. My previous 3 Ironman 70.3 race (Zell am See, Rapperswil-Jona and Koper) I did in the Alps or the eastern Alps in Slovenia/Italy and there were some serious climbs on those bike routes. This year I had decided to try some more “flatter” routes to see how I would cope with them. The bike route of the Ironman 70.3 Elsinore didn’t had a big mountain to climb but because of the constant going-up and going-down, the total height meters was still 600 meters. Not something to underestimate!

I really liked the track, probably because of the height meters and the nice scenery. Since I explored the route the week before, I knew where the longer climbs were and where to go fast on the downhill sections. This really helped me a lot to pace my biking on the climbs and brake as little as possible on the downhills. 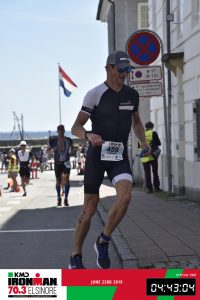 The finishing of the bike section in Helsingor was interesting since a lot of volunteers were standing ready to take over the bike! So no racking of the bike yourself, this was done by volunteers! Kind of valet service during the Ironman race 🙂 And this went very smooth since there were plenty of volunteers.

For me, after handling my bike to one of the volunteers, was to run further to the transition tent and grab my Red bag and slip into my running shoes. The bike section took me 2 hours 22 minutes and 16 seconds, good for place 53 in my age group and overall place 335 of all competitors. 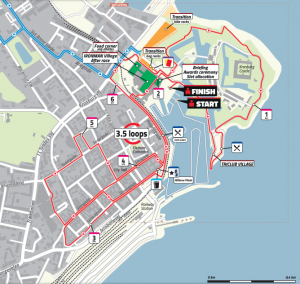 But there was still a half marathon to run! So quickly off the transition and onto the run route. The route first led us to the Castle Kronburg, around its massive and height walls and then to the waterfront and into the town center. There were some tighter streets to go through and finally to the waterfront again, around the market halls and then ready for the next lap. 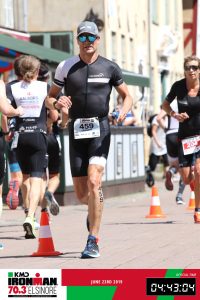 In total we had to run 3.5 loops, so after the 3 loop we only had to go around the castle and from the water front directly to the finish line! I had a good run, and after a quick toilet break in the beginning of loop 3, I could speed up and make a nice final acceleration. This meant that I completed the half marathon in 1 hour 38 minutes and 7 seconds, which was good for place 54 in my age group and place 353 overall. 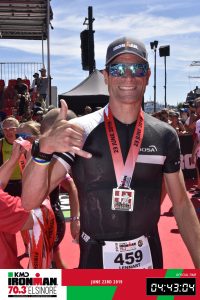 Finishing the Ironman 70.3 Elsinore in a total of 4 hours 43 minutes and 4 seconds! A great time for me to stay well under the 5 hours! Really, really happy with the result!

This time was also the fastest time I’ve ever done in an Ironman 70.3 race so far! I understand that the finish times all depend on the bike and run routes, the weather conditions etc, but I’m really pleased with this time! This resulted in a very good finish and ranking: place 54 of 306 athletes in my age group and 353 of 2519 athletes overall! Percentage wise: top 20% in my age group and top 15% overall!

And then, what’s next? It’s only the end of June… Plenty of races to do in the rest of summer!