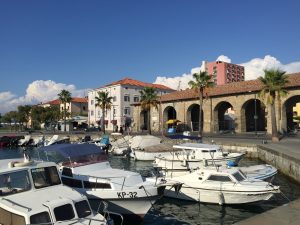 Koper is an old town in Istria, Slovenia and it’s probably more known as a harbour at the Mediterranean Sea than a tourist destination. At least I think there isn’t much to see or do for tourists actually. Well, not that I was in town to act as a tourist! I was here with only one goal: compete in the inaugural Ironman 70.3 Koper, Slovenia!

I was already one day in Koper just a couple of weeks ago during my summer trainings program to explore the bike route in order to know what to expect of it. Having done that, was a great advantage because I knew a lot better what kind of road, sharp turns, steep and downhill sections, etc would come up. Certainly recommend that for any race if you have the time. The rest of my training program I spend around Innsbruck in Austria, and Pula in Croatia. I find Innsbruck having a cool young atmosphere city and nice mountains around and Pula is an old historical town in Istria, Croatia. Istria has some very beautiful beaches and many tourist towns. Until 2017, Pula had its own Ironman race and I was actually interested in that race until I found out that Ironman 70.3 Pula was cancelled for 2018. The new Ironman 70.3 Koper Slovenia would be a good replacement I thought! 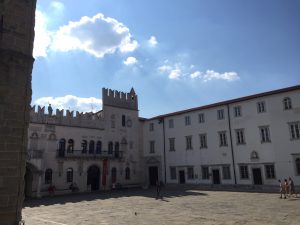 Anyway, about mid September 2018, I came back in town just a few days before the race weekend. I had booked a spacious apartment in the center of the Koper. Several bedrooms, a living room and a large kitchen. Not that I needed all this space but it was quite cheap and perfectly located for race day. Parking my car in the large parking garage in town was even included!

During the build-up of the whole area, it appeared to me that the transition zone would be rather small and that the swim start would be from a stony ‘beach’. The center of Koper just doesn’t has a lot of open space for a large transition zone and more spacious start area. At least not for the 2018 race, maybe for next year’s race they can find a better spot.

After registering at the Taverne in Koper with a nice view over the marina with its small sailing boats, I came back at the apartment with the transition zone bags (Red, Blue and White), my start number, swim cap and an Ironman backpack with some flyers of sponsors.

On Saturday was the bike check-in and drop-off of the Red and Blue transition zone bags. 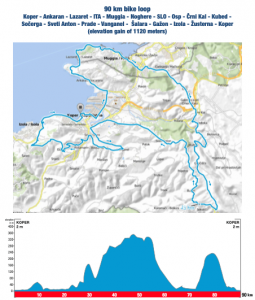 I don’t know why but the athletes briefing was not in Koper but in a completely different town, called Portorož, which is quite far away from Koper! It’s also a tourist town where it’s difficult to park you car, which is far from ideal for sure and I hope that they will find a building in Koper for next year’s race. The athletes briefing was the usual stuff: explanation of the rules & regulations, drafting, penalty tents, etc.

An early start and when I woke up I could hear the faint music and speaker already. Luckily my apartment was really close to the circus area and after an early morning pasta meal and getting the rest of my gear ready, it was just a short walk to the transition zone to do the final preparations for my bike (water bottles, energy bars and gels) and also for my transition bags. My running shoes, extra water bottle for after the swim and before the run. After that I had plenty of time for a nice warming up and getting into my wetsuit. Because luckily for me it was a wetsuit-legal triathlon! At least that would help me a little bit! Slowly it was time to line up and wait for the start of the Pro’s. Every time I’m impressed how fast they take off! With them gone, it was time for the age group start! 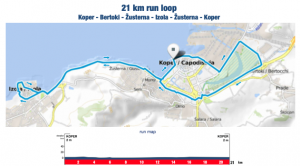 The swimming start was from the Slovenska Obala beach and in the short period between the Ironman 70.3 Rapperswil-Jona and this race, I didn’t improve a lot. Unfortunately that showed in my swim time as well… Next to that, and I don’t know why, but soooo many really slow swimmers were starting in front of me. Some were even swimming in breaststroke style! The swim start was a typical rolling start and once the Pro athletes are gone, all the others should start depending on their realistic 1900 meter swim time… There are usually signs for ‘under 30min’, ’30-35min’, ’35-40min’, etc etc. Well, apparently that didn’t really happen… Not that I’m such a fast swimming but this was disturbing me during the swim quite a bit. My swim time of 42 minutes 4 seconds wouldn’t be way more quicker but maybe my annoyance level would not have been so high 😉 This ‘not-so-great’ swim time resulted in the 168th place of 237 athletes in my age group, 893 overall place of 1308 athletes. After the swim, coming out of the water and running to the transition bags to change into my bike shoes. Now, sport number 2 of the triathlon would be a lot better! 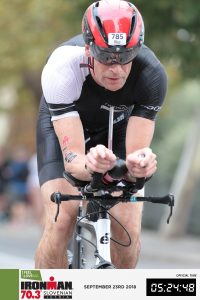 I knew the bike route was quite tough from my summer training ride a couple of weeks ago. Certainly not a flat course or a course with only one little mountain to climb. No, this course was challenging! A couple of steep and long climbs, some great downhill sections, sharp turns and more steep climbs and to finish off when you’re getting closer to Koper there was quite a long sections of going up-and-down the whole time! The highest point is not crazy high, only just over 400m but believe me that they felt higher! Late summer in Slovenia and the temperature was still 28 degrees. 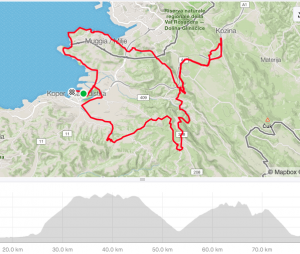 But to be honest, I really liked this bike course because it was so challenging! I knew where to watch out, keep an easy pace because the climb was long and where to go full in during the downhill (which I love anyway) and keep cycling on power through the up-and-downs! I was happy again (especially after the swim) but of course it was still tough. If it wouldn’t be tough, I wouldn’t be giving enough power! 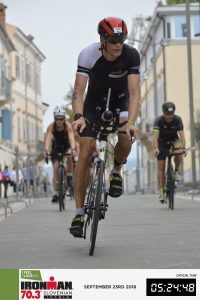 The 90 kilometers I completed in 2 hours 44 minutes and 22 seconds! This meant that for the bike section I ranked number 51 in my age group and overall rank number 271! Not bad at all! But this was of course not the end, still half a marathon run to go! So it was back to the transition zone, rack my bike and change my bike shoes for running shoes! 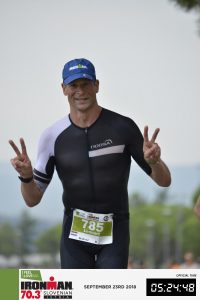 I started the run quite well and the route led us to the east of the town, going around some kind of nature area, along a major road to the waterfront and then towards Izola where the turning point was and then back along the waterfront to the finish in Koper. Soon after starting the run I felt in my stomach that I really needed to find a toilet… I kept running because they were all occupied and finally I found an empty toilet and I could do my business… The rest of the run felt better and I stayed around 5 min/km. Not overly fast but I was getting tired and the temperature wasn’t helping me either. 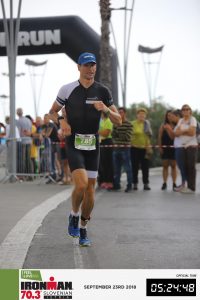 Coming around the corner I could see the last section that went into Koper and the finish line! The run section I completed in 1 hours 50 minutes and 33 seconds. At least this was 10 minutes faster than the half marathon of IM 70.3 Rapperswil! For the run section I ranked place 55 in the age group and 300 overall. 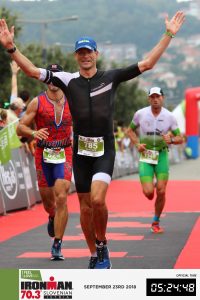 Of course I was happy!

I completed the Ironman 70.3 Koper Slovenia in 5 hours 24 minutes 48 seconds. Age group rank place 55 of 237 and overall rank place 300 of 1308. Calculating my result against the rest would mean that I finished in the top 25% in my age group and overall as well. 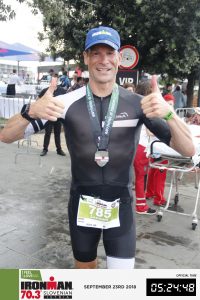 Yes, I was happy with the result but I knew that if I wanted to improve then I needed to make some changes… I needed to become stronger, better technique and FASTER!

But how to accomplish all this, I didn’t really know yet!