Rapperswil: A small town at the Obersee and Zurichsee lakes in northern Switzerland. Home of the Ironman 70.3 race Rapperswil-Jona since 2007! My second triathlon after completing the IM 70.3 Zell am See Kaprun in 2017.

After spending about 2 weeks in Innsbruck, Austria, for mountain specific bike trainings (and enjoying the city of Innsbruck where I lived for about 2 years) I arrived in Rapperswil about 1.5 weeks before the race and I stayed in a nice comfortable place that was close to the town center, the lake and in a quiet area. 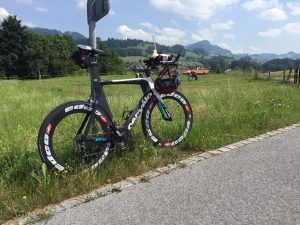 My plan for this 1.5 weeks before the race was to explore the bike track, swim a couple of times in the lake and run the running route a few times as well. All the exploring and last trainings went pretty well, except with my bike wheels. During a ride a while ago when I was still back home, and during my first ride around Rapperswil a frontwheel spoke suddenly broke. In Holland, I found the first bike shop to be able to help me out but all the bike shops around Rapperswil couldn’t / wouldn’t help me out since the spokes are quite special shaped. Luckily I managed to get in contact with the Edco Wheels main office and they were so kind to help me out! I met one of their salespersons (also a triathlete) about halfway from Rapperswil and their office, and he gave me a brand new frontwheel, some extra outer and inner tubes and some goodies 🙂 Well, if you don’t call that customer service, then I don’t know what you would! 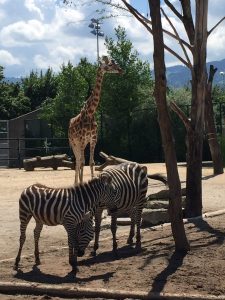 With this new frontwheel I was feeling confident again! Actually the forecast for the race was looking promising! The water temperature was good, just below the wetsuit-legal temperature and the air temperature was quite high. No rain was to be expected so good conditions for a race!

For the rest I was enjoying my time in Rapperswil with a little bit of sightseeing, standup paddle boarding on the lake, visit to the local Zoo and exploring the town where you can enjoy good coffee and food with a great view of the lake. 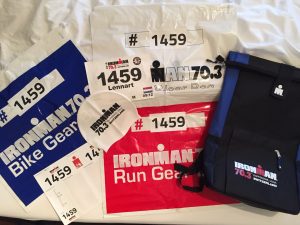 A large grass field with space for lots of bikes and large signs to show you the way ‘bike out’ and ‘run out’ so you wouldn’t get lost in the hectics of the race! The transition zone was quite close to the swim exit so the transitions shouldn’t take awfully long! 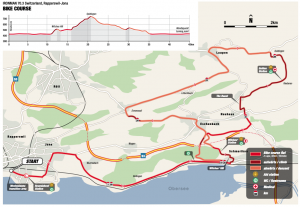 The Athletes-briefing was in the large stadium and, as usual, was quite funny. They went through all the known topics like the Ironman rules & regulations, showing the real distance for stayering, and building up the pressure for the tough bike climbs that they have called the Witches’ Hill and The Beast, and to create more fun, we would have to do these twice (both bike loops)! 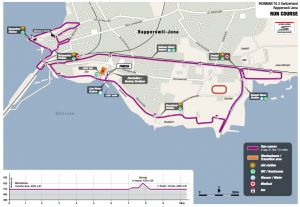 The famous climb on the run route going up the castle “Schloss Rapperswil” stairs, called the Stairway to Heaven, which we also had to do on both running loops! But no big surprises further, a friendly reminder to watch the temperature, use sunscreen and drink a lot of water and another reminder to smile once you cross the finish line! Don’t want to have a finish photo of you looking at your watch instead of looking into the camera! 🙂

10 June 2018: waking up before sunrise, warming up a prepared pasta meal and not feeling like eating at that early time. Well, it’s energy so I better eat it because I’ll certainly need it on the race day of Ironman 70.3 Rapperswil-Jona Switzerland! 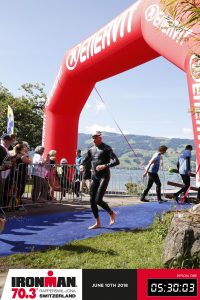 A short walk from my accommodation to the transition zone was waking me up completely. Closer to the transition zone, more and more triathletes were on their way and the speaker was trying to motivate everybody and creating a cool atmosphere. I did my last preparations like putting the water bottles on my bike, taping the gels on the frame and hanging my street wear bag on the rack.

I had a nice view of the start area and saw the Pro’s start. Man, they really swim fast! After them, it was time for the Age Groupers. Since I’m not a really fast swimmer, I was starting a bit later but it was coming closer and closer! And then… 3, 2, 1, GO! 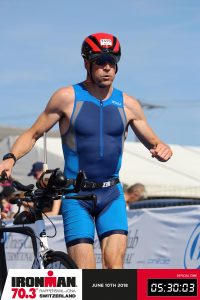 The swim wasn’t really great for me! I had some troubles with the higher waves than I’m used to and than I experienced during my trainings in the lake before and it was a struggle… After a long 41 minutes 58 seconds I finally came out of the water! So happy that was over and now run in T1 via the Blue bag (take off my wetsuit, put on socks and bike shoes) to the bike in the transition zone. This was certainly a lot more my sport compared to the horrible swim! 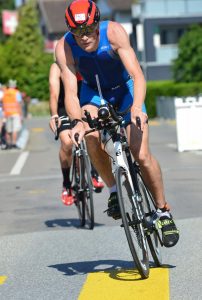 The bike route was a quick way out of town and then a flat section along the lake to Schmerikon. A sharp left turn, and now the climb of the Witches’ Hill started. A relatively short but steep climb which was tough but good fun altogether. So many locals were cheering to all the athletes, that was really cool!

After the Witches’ Hill it was first an easier uphill section and then The Beast! A very steep climb which went further into a good steep climb to Goldingen. After that a long decent back to Schmerikon and then along the lake to Rapperswil. A roundabout in town was the turning point for a second loop! Back along the lake, back up Witches’ Hill, The Beast and the long decent. This second loop felt certainly a bit more tougher but once I was on the road along the lake again, on route to Rapperswil it felt good! After 2 hours 38 minutes and 78 seconds I was back at the transition zone for T2. 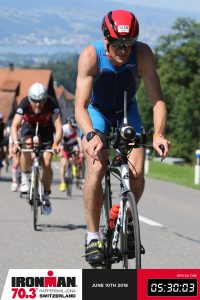 Quickly placed my bike on my spot on the bike rack and to the Red bag (change bike shoes for running shoes, cap and sunglasses) in the transition zone. Off to the run track! Two loops of each just over 10 km! First along the lake, then past the camping and back along the railroad track to the town center. In the town center, passing the marina and up the stairs of Schloss Rapperswil: Stairway to Heaven! Via the other side of the castle and along the other lake to the University of Rapperswil and then the second loop!

Since it was pretty warm on race day, the organisation had added some extra aid stations with water showers and sponges to cool the athletes down. Some locals were also spraying with garden hoses to help out with these tough weather conditions. But besides the weather, my legs were starting to fail me more and more. Getting heavier at every step. This would not be a great half marathon time! The run part took me 2 hours (!) and 22 seconds! 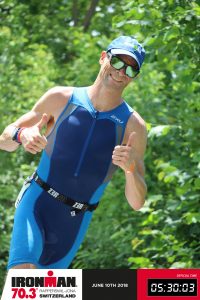 I completed the Ironman 70.3 Rapperswil-Jona in 5 hours 30 minutes and 3 seconds. This was a tough race but, of course, I was happy to have my 2nd Ironman 70.3 finished, received the medal and a finisher t-shirt 😉

Overall I wasn’t happy with my swimming result and that was certainly something that I needed to improve. Back home I was swimming quite often but, in general, my swim speed wasn’t improving a lot. Luckily, the bike result was really satisfying and, unfortunately, the running went bad. Really bad! I can’t remember the last time that I completed a half marathon in 2 hours…

From the 320 athletes in my Age Group my swim resulted in place 222, the bike result in place 93 and the poor running result in place 113. You could say the run result wasn’t even that bad (place 113 out of 320), but I knew I could have done a lot better than half a marathon in 2 hours! 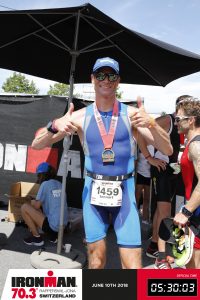 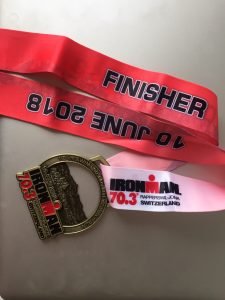 Looking back at the race, the weather conditions and my results, I have to say it was a good race. Very well organised, beautiful routes and great locals cheering along large parts of the tracks.

The next day I was driving home to The Netherlands with a happy feeling. Of course, many things I could improve but considering this was only my 2nd middle distance Ironman, only my 2nd year as a triathlete, it wasn’t too bad 🙂 And at least I would have something to improve 😀

Back home it would be back to working offshore again and after a short recovery period, start to think about training for my next race…