This is the race I’ve been focussing on the whole season. This is the race I have to deliver! No pressure, just give my 100% and enjoy the pain, exhaustion and happiness crossing the finish line. Right, enough BS! Get on and be ready!

Early morning, waking up and warming up my pasta meal that I prepared yesterday evening. Carbs for energy. Something that I’ll need today! Then a quick shower, getting into my trisuit, filling up my bike water bottle with NutrID nutrition and packing my last few things. Since my Blue bike bag and Red run bag are already in transition and I couldn’t access them on race day anymore, I had nothing to prepare for those bags. 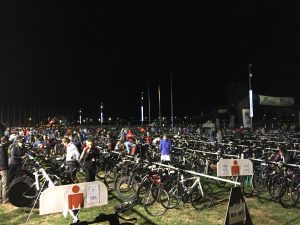 With just my white bag with the bike bottle, bike shoes and wetsuit, I walked around the Allier river lake to the transition zone. Probably around 6am I was entering the transition zone and many athletes were already there. After preparing my bike; bike bottle, attaching my shoes with the elastic laces, and checking the tires, all was ready. A quick warmup and toilet visit and then it was time to oil up my lower legs and get into my wetsuit. The speaker was warning that it was going to be quite hot later on the day. The organisation had taken precautions with enough nutrition posts on the bike route and quite a few on the running route. But it was still going to be well in the 30 degrees Celsius and mostly sun. In the morning it was actually not even too warm but that was probably just pleasant and I shouldn’t complain for sure! 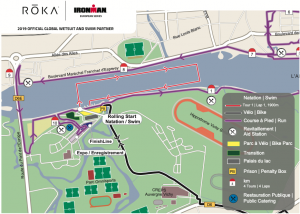 The start of the Pros Males was at 06:30 hrs and they were directly followed by the Pros Females. When these were gone, it was time for all the Age Groupers. With the typical Ironman rolling start where every couple of seconds a group of 4 were let loose! I had chosen my start group with the athletes of 35-40 minutes and it didn’t take long before it was my time. 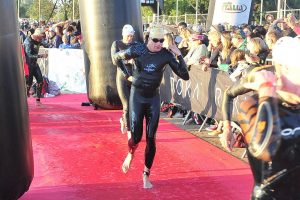 Start of the Ironman 70.3 Vichy! Running the few meters over the jetty and then diving into the water. That’s something I need to practise a bit more since my swim goggles moved a little bit, which I had to quickly redo after a couple of strokes. After that it was racing to the first buoy, turn right and then the long straight along the promenade. About halfway the total distance there was the buoy to turn right and at the other side of the lake river another right turn to swim back to the transition. This section felt longer than the first straight but probably I was getting more tired.

At the swim exit, getting quickly out of the water and then the short run via the outside around the bike park to the transition zone. The swim section had taken me 36 minutes and 9 seconds, AG rank 56, overall 516. Not overly bad. 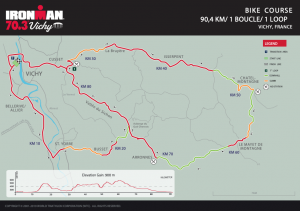 At the transition, grabbing my blue bike bag, pulling off my wetsuit and stuffing it in the bag. Putting my helmet on, chin strap fast and run to my bike. Quickly taking my bike off the rack and run the last meters to the bike exit. Crossing the bar and performing a beautiful flying mount and bike hard away with my feet on top of my shoes. T1 had costed me 3 minutes and 23 seconds. After a little while on the bike, when I had some speed and space, it was time to put my feet into my shoes and properly close them. During the Ironman 5150 Hoorn race I didn’t take the time to properly close my shoes and that had annoyed me for quite some kilometers until I had to redo them. Just before coming onto the main road, a crazy Frenchman was zigzagging over the whole road and he got some friendly words to stay on the side. Already had an almost crash in London, and wasn’t interested in trying my luck again!

From the start point of the transition zone, the route went south on the west side of the Allier river first. After a good 10 km and arriving at the town of Les Graviers, the route crossed the river and the first climb was starting. This climb was from the town Saint-Yorre to Busset and was only a few kilometers long but quite steep and has approximately 300 m height to go up. After that a fast downhil to the junction point Auberge du Gue Chervais. This is the junction point where the second loop will join the first loop route later. 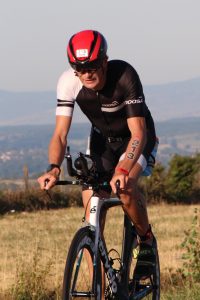 On the first loop from the junction point, the route was going mostly down but some shorter sections a bit uphill as well. At the town Cusset was the second junction point. At this junction point were already many visitors standing and cheering! After completing the first loop, you have to turn right at the Cusset junction point for the second loop and when you come from the second loop, you turn left to head back to Vichy. Turning right to go for the second loop, the first section was immediately a good steep climb! Again a short climb but steep nonetheless! From the town La Bruyere the route went quite a bit up and down. Short climbs, short downhill sections are following each other up. At Chatel-Montagne was another steep climb but this had a beautiful view of the castle (if you have the time and energy to enjoy the view!) and many people again on the streets. 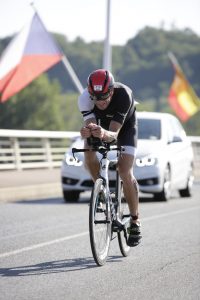 Directly after the climb ending up in the small town, there was a longer downhill section with lots of curves in the road where you had to be careful and then the last real climb at Le Mayet de Montagne. The next 20 km was mostly going down towards the town Cusset again. Turn left to Vichy, and when you thought you were almost there, there was one more good but short climb and then the last bit through the city of Vichy, cross the bridge, around the transition zone and then the final meters to the transition zone. Another smooth flying demount just before the bar under the viewing eyes of many visitors that were cheering for everyone that came around the corner! The atmosphere around the transition zone and last part of the bike route was great! There weren’t that many visitors going through the small towns, but when there were people, they were cheering for everyone!

The 90 kilometers bike route took me a total of 2 hours, 44 minutes and 29 seconds. Not bad at all considering the height meters and warm temperature on race day! My ranking for the bike section was in my AG place 12 (!) and 131 overall! 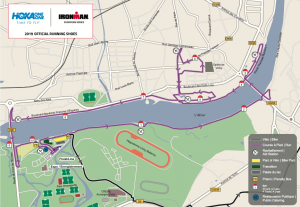 Returning my bike back on my rack position, it was time to change for the half marathon run! Picking up my red run bag, slipping into my running shoes, grabbing my NutrID flex bottle, cap and sunnies and placing my helmet into the bag, I was ready! T2 took a little less time than T1, 3 minutes and 15 seconds. 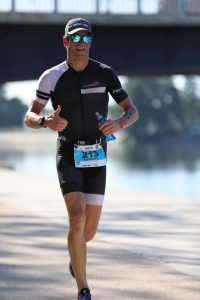 From the transition zone, the first sections was over the walking promenade along the Allier river and passing the Hippodrome and the golf course. Coming closer to the bridge Pont de Bellerive you could hear all the cheering, music, drums and other noise the people were making! Going under the bridge, turn right and cross the bridge to the other side of the river. There was another right turn to continue a bit further along the river. At a ramp, we went down to the promenade level and back under the bridge along the river again. A short detour going through the center of Vichy, past the thermees and back to the promenade. 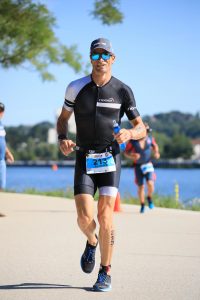 Continuing on the promenade to the bridge Pont de l’Europe, with a short climb and then crossing the bridge back to the transition zone side. At the other side, it was back to the promenade and via the Ironman event area it was time for the second loop. When I came at the Ironman event area, I saw an empty toilet and quickly jumped in to release some pressure that was building up! The course went a little bit further to tease you how the finish area was looking, but then the sign for 2nd loop was not towards the finishers area! My running times were not improving, actually in the second loop my average speed was between 5:00 and 5:30 per km, and in my first loop the average was between 4:30 and 5:00 per km. Was it the heat or the exhausting starting to kick in? It was certainly hot but probably I was getting more tired as well! 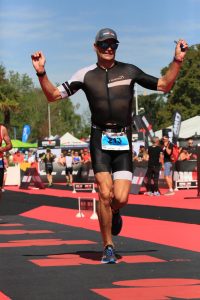 The second loop was getting more difficult but at the far end I managed to squeeze out a last final acceleration, turning right to the finish area and running with a big smile for the photographers over the finish line! Yeah! 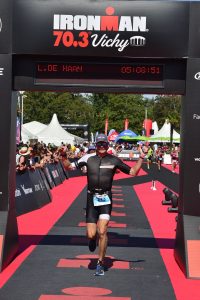 My half marathon run time was 1 hour 41 minutes and 35 seconds! This was placing me on AG ranking 20 and overall 200! Not as good as the bike rankings but still not too bad! But that was only my feeling after a few hours, when I realised everything a bit better. Right after the finish, I was far from really being happy with my running. The second loop was feeling so exhausting that I couldn’t enjoy and realise the performance.

Again, only after a little while the result started to sink in. By that time, the post-finish photo was already been taken (with a forced smile) and I had a little bit to eat and drink.

Coming back to my performance of this race. AG place 20 is my best ever ranking in an IM 70.3 triathlon! I should be happy, thrilled and excited! This feeling came, I am happy with my ranking and luckily this feeling stayed for quite some time 🙂