Just a couple of days after the triathlon race of Ironman 70.3 Les Sables d’Olonne in France, Ironman Netherlands sent out an email regarding the upcoming Ironman 70.3 West-Friesland… It’s canceled for 2020!

Of course, I knew that was a possibility but while I was in France and seeing the Coronavirus precautions they had taken, I was getting quite positive about the go-ahead of the IM 70.3 West-Friesland. Unfortunately, it’s not happening in 2020 and the new date will be somewhere in June 2021… Apparently the reason is that one of the towns where the bike route goes through had redrawn its permission. This was a real bummer and really felt that this season was over before it actually started.

My previous race didn’t go as I wanted and I had good motivation to show my real condition and speed on the next race. What now? Just forget about racing and start the offseason?

Well… There is another race in the Netherlands organized by Ironman… It’s not the middle distance (nor the full distance 🙂 ) but an Olympic Distance in the far south-east of the country: Maastricht. Ironman names this OD triathlon: Ironman 5150 Maastricht Limburg!

But is this race happening? Quickly checking the Ironman website and registration is still open! The original route has been changed recently from going through the city center to more outside through the suburbs and surrounding towns due to the precautions for the Coronavirus. Sounds reasonable and doable! Checking the bike route doesn’t provide me much information about the course. The Ironman website states it’s a ‘hilly route’ but no information about the vertical profile or total vertical meters (yes, we do have some vertical meters in the Netherlands, especially in this area!), and only a fairly unclear bike route. Trying to copy the bike route as good as possible in the Strava route planner to have a better idea and it turns out that it’s more a rolling route with one short but steep climb of about 60 vertical meters and one similar descent.

The swimming will take place in water that is connected to the large river Maas but it doesn’t appear to have much current. It’s a water body where gravel was dug out for the building industry many years ago.

The running route is one lap through a nearby town and along the Maas river. Nothing exciting but a quick route.

Ok, the triathlon sounds pretty interesting but it’s a good 2.5 hours drive from my home town. It’s a bit too much to drive up and down in one day so that means I need a place to stay. But when I have to stay overnight, I better stay a couple of nights and have a quick exploring of the bike route a few days before the race 🙂 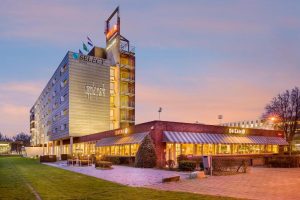 Checking online for a good place with preferably parking nearby or included. It seems that there are no hotels available anywhere close to the transition area so I need my car anyway to drive there on Saturday and Sunday. And maybe check out the water with a last open water swim. Maastricht is a popular city all year round and just at the end of the summer it’s not any different. There isn’t that much available without costing a crazy amount of money. Finally, I found the Apple Park Maastricht hotel which is about 20 minutes’ walk to the city center and has a free car park next door and a secured car park as well.

Right, so nothing is in the way to register and compete in this triathlon? A quick text to my coach and the answer was: DO IT! He’s got faith in me that I can perform better than my last result so that’s a good motivation for my own feeling as well!

I’ve registered for the Ironman 5150 Maastricht Limburg and booked the hotel! Only one week to race day!!!!