27 August 2017 was the day that I had my first Ironman 70.3 race, the Ironman 70.3 Zell am See Kaprun in Austria. It was only 10 months before that I was challenged to race in this triathlon by a good friend and it was an interesting and challenging journey!

From knowing very little about triathlons in general to start training 3 sports to competing in an Ironman race! From not owning a road bike to not able to swim freestyle for a 25 meter distance in a swimming pool to running my first half a marathon since quite some years again. And then as fast as possible do all these 3 sports (1,900 meters swimming in open water, cycling 90 kilometers through the Alps around Zell am See and running 21,1 kilometers around the lake of Zell am See). 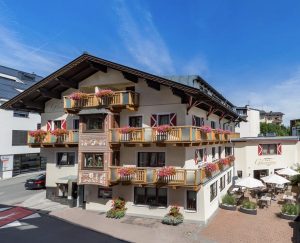 I had booked the Glasererhaus hotel in the center of Zell am See via booking.com for the long weekend, which was perfect because I didn’t had to drive anywhere or make other transportation plans to go to the transition zone, athletes briefing, etc. Since it was such a busy period (middle of summer, school holidays, which is always busy) and the hotel had a dedicated parking area there was no issue at all.

The drive from Innsbruck was only about 2 hours so not too far away for me! Early Friday afternoon I arrived at the hotel, in time for a short and easy run at the banks of the lake to loosen up my legs and walk around town to do a little bit of sightseeing. There were actually a lot of tourists visiting Zell am See and the nearby glacier of Kaprun but also quite some athletes going for a run, bike ride or swim in the lake. 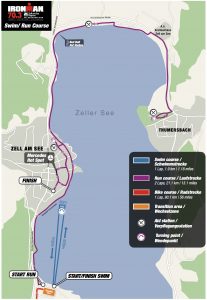 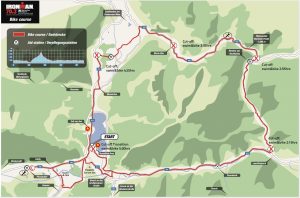 On Friday afternoon I met up with my friend and we registered ourselves and received our timing chip (very important!), race numbers, 3 plastic bags (run, bike and street wear bags), and some more goodies in an Ironman bag. Later that day we went to the Athletes Briefing at the Zell am See conference center. During this briefing we were told what to expect with regards to the race routes, scenery, challenging sections and also what certainly not to do (no drugs, nudity, taking shortcuts, drafting, etc) but the most important thing: SMILE while crossing the finish line!!! 🙂

Of course that’s if you made it that far, since the bike route was quite challenging with the 15 kilometer long and steep climb to Dienten am Hochkoening. But we were confident, we had trained a lot and our previous goal to finish and finish within 6 hours had changed to finish within 5 hours and 30 minutes… 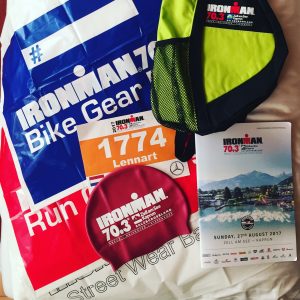 In the afternoon, we had to check in our bikes and the red (run) and blue (bike) plastic bags. In the blue bag goes everything your think you need for the bike ride after the you come out of the water (bike shoes/socks/helmet/race number/etc) and in the red bag goes everything you think you need for the run after the bike ride (running shoes/sunglasses/gels/hat). It was quite impressive to see the amount of real triathlon bikes! My friend and I, thought we were almost the only two that didn’t had a tri bike but just a normal road bike…

Saturday evening I had a simple but nice pasta meal at a nearby restaurant and ordered an extra meal to take away. This meal would be my calorie rich pasta meal at early breakfast on Sunday morning.

Sunday very early morning my alarm woke me up. Luckily the breakfast ladies of the hotel were starting preparing the breakfast buffet early and were so kind to warm up my pasta meal and gave me some extra cheese to make it a bit more tasty! After the meal and getting into my tri suit and jogging pants, grabbing my stuff and white street wear bag, I headed to the transition area which was about 30 minutes walk.

Arriving quite early at the transition area, making the final preparations at my bike with nutrition (taping gels to the bike and energy drinks in my water bottles) and sorting out the red and blue bags. The rest went into the white street wear bag and I was ready! I met up with my friend at the transition area who was preparing his stuff as well. The water temperature of the lake was just below the wetsuit limit, so we were allowed to swim with the wetsuit! Yeah!

The male and female Pros started first and then the rolling start of all the age groupers. One long line of athletes were allowed to enter the water in a controlled flow (starting of the age groupers was based on your expected swim time). 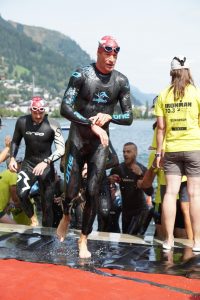 Swimming was certainly not my strongest sport of the triathlon so I decided not to start too far in the front. My friend is a lot better swimmer and was going to start a lot further to the front. During the swim it was quite hectic with athletes trying to pass me and I was even trying to pass some slower swimmers. After a long 39 minutes and 50 seconds I came out of the water and run to the transition zone. After almost 6 minutes I was on my bike and ready for the 90 kilometers bike ride!

A couple of months earlier, I came to Zell am See (actually stayed at the Glasererhaus hotel as well) to explore the bike route. I think that really prepared me a lot better since the long and steep climb, decent with quite a lot of curves in the road and knowing where really to brake and how to pace myself at other sections a little bit better than going in completely blindly! 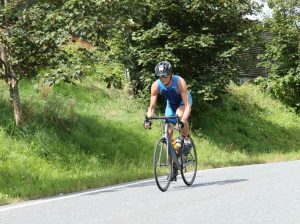 Back to the race; after leaving the back roads from the transition area, the first section of the bike ride was for about 20 kilometers over a good B-road (311) to Lend/Embach after which the climb started to Dienten. The climb was good fun and having cycled through the Alps a lot in training, I was quite used to the climbing and it went very well! I overtook so many so I was feeling really good. Just after Dienten am Hochkoning was the highest point of the bike route at Filzensattel, then a few kilometers steep decent and then the long false flat of about 50 kilometers going through several towns and fields. We passed through Zell am See on the main street and continued to Piesendorf and Kaprun (going past the castle of Kaprun) for the final part of the bike ride to the transition zone. Somewhere in the beginning of the false flats I managed to catch up with my friend, exchanged a few words and to wish him well and continued with the race again. I completed the 90 kilometers bike ride in 2 hours, 39 minutes and 47 seconds. 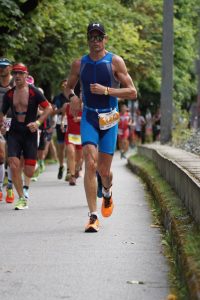 The second transition went a little bit faster than the first and then it was off for the half marathon run! A total of 21.1 kilometers from the transition zone and then 2 laps along the lake and through the town of Zell am See. Somewhere on the first lap I had to jump into a toilet because of some stomach issues and luckily this didn’t come back anymore. The run was quite tough and the energy was escaping me. I couldn’t see any gels anymore and the provided nutrition wasn’t doing me any favours. 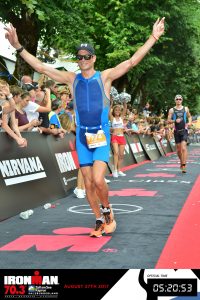 Crossing the finish line was such a good feeling!!! In a total of 5 hours, 20 minutes and 53 seconds I completed the Ironman 70.3 Zell am See!!!

After crossing the finish line I was offered a beer, which I took in my hands but I was feeling so weak that I couldn’t even drink it! The water I was given, went in a little bit better though! 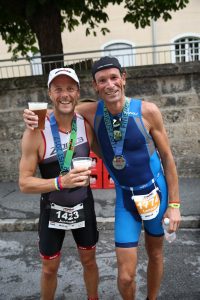 To complete all the information, the run took me 1 hour, 51 minutes and 52 seconds. Certainly not my fastest half marathon time but it was quite an accomplishment in total! The ranking in my age group was place 68 out of 331 athletes and overall rank 574 out of 2439 athletes.

My friend finished not far behind me in 5 hours, 31 minutes and 41 seconds. We were both very happy with how it went, the result and experience. We were pretty lucky to finish before the bad weather came in, because the race had to be stopped due to thunder and lightning for a short while, continued again and I’ve understood that the last athletes were completely stopped due to more lightning! That would have been horrible and luckily this was not happening to us!

But would this be the only Ironman 70.3 I would compete in, or would there be another one… That’s for another post…