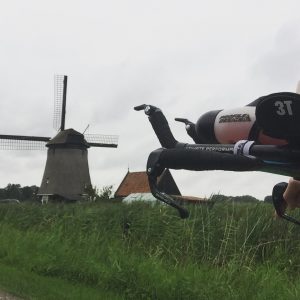 I’ve just finished the Ironman 70.3 Rapperswil-Jona triathlon in Switzerland, and drove back home to The Netherlands.

After arriving home and a quick recovery run, I thought it was time to continue training again. Especially since I would have to start working offshore pretty soon again! 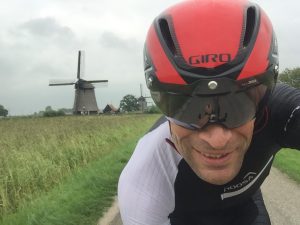 My trainings consisted out of random planned swim, bike and run trainings. I still didn’t follow a trainings program but just did what I thought that I wanted or needed to train that day.

This resulted in swim trainings about 1-3 times per week and then on average about 2 km per session. Some bike rides of 40-60 km once in a while and a few run trainings. 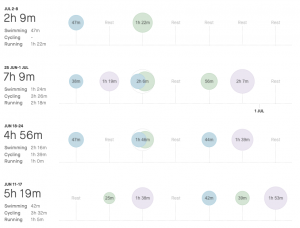 After about 3 weeks I was back working on a vessel again. This time a vessel with a reasonable sized gym (although quite noisy and warm nearby the engines). Unfortunately the project was quite demanding and I didn’t had much time or energy to workout. This project took about 4 weeks in which we came once into port for a day (where I had a quick but terrible run training). My condition was back to zero when I came home on one of the last days of July.

I certainly had to increase my trainings to the max in order to get my condition back, be able to complete the 1900 meter swim without drowning and ride the mountains of the Slovenian Alps. 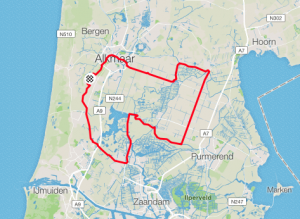 In the next 4 weeks, I only had twice a rest day. A lot of swimming, riding and running. All of the swim trainings were conducted in a nearby indoor pool, bike riding and running in the vicinity. I didn’t really know what the best training method would be for me, no build-up to the race or planned easier weeks. 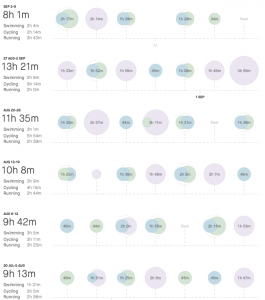 Just go on the bike and ride wherever. Quite often a basic 45 km loop around the Alkmaardermeer or a little bit further through the Beemsterpolder or even all the way to the inner-sea of Holland: IJsselmeer.

After all the running the last half a year, it was really time to replace my running shoes. I had good experience with the specialist triathlon guru Jeroen and his shop in Hilversum: TriPro. So I made an appointment for an extensive 5D run scan to check my running style and advise me the best running shoes.

They really took their time and made scans with all the shoes I was trying out. Of course you can feel a little bit how shoes feel, you can see somewhat on a video how you’re running but this program Motion Metrics 5D analysis’s your complete body movement! See underneath screen grabs to get a rough idea. I might write a complete review about this running analysis in the future. After good advise and having a good feeling about a certain pair of running shoes, I bought these and went home happy 🙂 Ready for many more kilometers of happy running!

After the 4 weeks at home, I packed my car and drove to Innsbruck in Austria again! I stayed in the center of the city that I lived in for about 2 years and that I quite like! I know my way around, speak the language and know some people. Always nice to be back! But this time my purpose was mostly for preparing myself for the IM 70.3 Koper Slovenia. Train hard by swimming in the Baggersee (open water lake), ride my bike over the beautiful but steep mountain roads to train my legs and run along the river Inn that flows right through the middle of Innsbruck city. 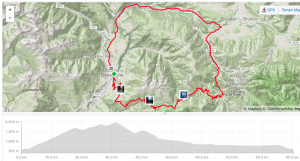 After about 3 weeks in Innsbruck, I drove to northern Italy (not far from Innsbruck) where I had another nice bike ride starting from the town Brixen in South Tirol. Lots of climbing to the top of the mountain and good downhill to practise. These are great trainings for me! I love being in the mountains and doesn’t matter whether that is in summer riding my bike or hiking, or in winter time going off-piste skiing through the freshly fallen snow! But this time it was summer and it was hot! 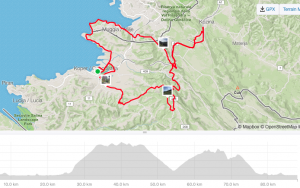 Italy was just a short stop and I drove further to Koper in Slovenia where I arrived early morning. I quickly assembled my bike and rode the Ironman 70.3 Koper bike route to check out the route, experience and remember the difficult sections and know where I could go fast during the downhill (and where certainly to brake during this same downhill!) and where to pace myself climbing up in the steep sections.

After this 1 night stay in Koper, I drove further to Pula in Croatia. This area is certainly a beautiful area at the Mediterranean Sea with a long history. The Amphitheater of Pula is open for public and the narrow streets in the center are from a time of many centuries ago! 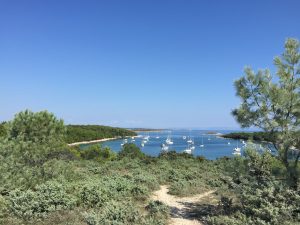 In Pula, I was staying in a great apartment, just outside the busy center of the city. I could park my car almost in front of the apartment all the time and it was only a few minute on foot to reach the city center. Pula is really a tourist city with lots of old buildings, attractions and other things to see and do.

At several nights through the summer they organise a “lights-night” and many buildings have lights projected or other artistic light themed expressions. Really interesting and since the temperature at night is still quite high, you can enjoy these special events to the fullest.

Of course I kept on going with my triathlon trainings! I did a couple of 45 km bike rides from Pula to Valtura and Medulin. A lot of B-roads and overall I felt pretty safe on the bike with the cars driving past. I also did go swimming every day that I went to the beach. Or a couple of swim sessions on the same day. The area of Prematura has beautiful beaches and very nice bays for sailing boats and swimming. For the run training, I went a couple of times to the forest Šijanska Suma Park and ran over the marked tracks. The air temperature was high and this was good for the acclimatisation for the upcoming race in Koper.

Only 4 days before race day, I drove back to Koper, Slovenia. Koper is such a different town compared to Pula. A lot dirtier and less interesting for tourists. Well, it still has some old buildings that are interesting and a marina with some smaller sailing boats but in general I wasn’t overly excited about this town. I’ve heard (and seen when I drove through Slovenia) some great looking towns, nature and lakes so certainly explore Slovenia but I would rather choose other areas and towns over Koper.

Anyway, just a few days away from IM 70.3 Koper Slovenia! Only a few easy trainings were planned so I had enough time to relax and walk around town a little bit. A couple of days before race weekend, the large trucks of Ironman drove into town! This meant the built-up of the whole circus: transition zone, fencing the routes, swim start area and of course the finish line and more! More about this triathlon race in the next post!