After the Ironman 70.3 West-Friesland at the end of September 2021, it was time to relax a bit and train a lot less. No vacation to some exotic destination or completely stopping all training but just at a lower intensity and durations. I was planned to start working soon after the race but that was postponed a few times (in the end until the 1st of November even). Mentally I took a small hit at the last race because of the pretty crappy performance but luckily, I’ve overcome that feeling 🙂 and I’m looking forward to an even better season of 2022! I have some bigger plans but more of that you can read further down… 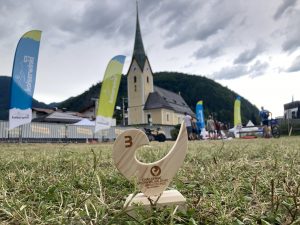 Below, I’ve specified the 4 races and the comparison with the top 3 in my AG. 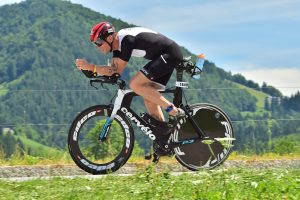 The weather was good and due to the Corona restrictions, the swim start was slightly different than normal rolling starts. We started one-by-one so there was one long line of swimmers instead of more grouped together. The lake conditions were perfect for sighting and swimming. The bike route consisted out of 2 laps and had a total of about 1000m elevation. The run was 4 laps around the Walchsee lake which had some false-flat sections.

Swim: My best swim time ever and an average of 1:40/100m. The lake conditions were perfect with calm water and hardly any wind. I started as one of the last in my start group and my start group was one of the last groups to start, and was able to overtake many swimmers. Probably due to the one-by-one start, it was easy to overtake since you didn’t have to go far off the direct line because there weren’t any big groups. My swim resulted in the 8th position, a top 10% result.

Bike: Two laps and especially on the first lap I was able to overtake many athletes. Sometimes the roads were a bit narrow and had to be patient but often I was able to pass others without delay. I had a good average power of 243 Watt and only in Maastricht in the IM 5150-race, I had a higher average power. The total bike distance was just over 82 km instead of 90 km. My bike ride resulted in the 6th position, a top 7% result. 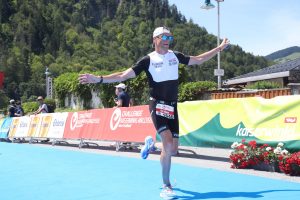 Run: Was getting quite warm but I was able to run with a good average pace. Comparing the 4 laps around the lake, my pace went down from 4:15/1km on the first lap to 4:30/1km on the last lap. My run resulted in the 3rd position, a top 4% result.

Because of this result, I qualified for the Challenge World Championship triathlon race in Samorin, Slovakia: The Championship! 🙂

The race itself went very well. A very good swim, bike ride and run! All pieces felt together! This is how it should go! 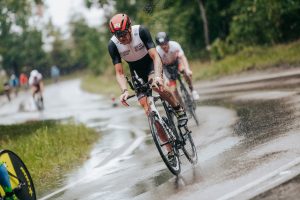 The swim start was from the beach to open sea and then back to the harbor where the transition zone was. The one loop bike route was through the backcountry and villages but also challenging because of the terrible road conditions with so many potholes and cracks. The 2 loops run course was through the city center with some long false flat sections that would hurt. The whole week the weather was great but on the race day it was cold and started to rain pretty hard.

Result: 15th out of 166 finished athletes

Swim: the sea conditions were tough with pretty high swell and wind waves against each other. The sighting of the buoys wasn’t ideal due to the swell but I was able to overtake quite some other athletes. Not a dramatic swim time but not fantastic either. My swim resulted in the 12th position, a top 10% result. 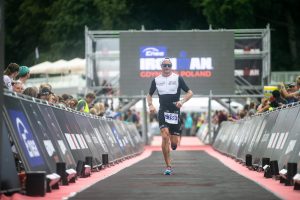 Bike: soon after starting the bike section the weather changed and it started to rain and get even colder, which resulted in that I was shivering and chattering teeth all the way until coming back in the city of Gdynia… I tried to push power but I didn’t have the energy and my average was only 229 Watt. My bike ride resulted in the 17th position, a top 7% result.

Run: the first km of the run went fine and then the first false flat section started and it started to hurt. The first lap was around 4:30/1km average and the second lap was just over 5:00/1km average. The run was a bit disappointing with a half marathon time of 1h43m. My run resulted in the 39th position, a top 25% result.

Total: tough race, which the weather condition didn’t make it any easier. It was warm the whole week before the race and on race day it was cold and raining a lot. Not my favourite conditions! After all, the swim and bike times and rankings were actually pretty good. The run was just a bit disappointing. Finished: place 15, which is a top 10% result. 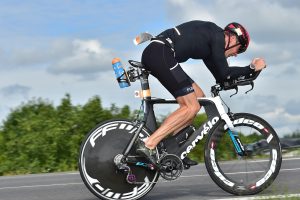 Qualified at the Challenge Walchsee race, this was my first World Championship! The happening was great, and cool to see so many triathlon-pro’s the days before the race due to the new PTO race the Collins Cup. The Collins Cup was the day before The Championship so I had all the time to watch but unfortunately the weather wasn’t great. The weather was great the weeks before the race weekend but, just like in Gdynia, the weekend was raining and a lot colder 🙁

The swim of The Championship was in the river Donau (Danube) and the first section was against the current and the second half, closer to the dike, was with the current. The other way around would have been more beneficial for the athletes having more current towards the middle of the river pushing you. Next to this, the wind was blowing strong against us on the first section. The bike ride wasn’t through the backcountry like previous years, but after a short section to the highway, it was 4 times the same stretch on the highway and the wind was blowing hard from the west which meant twice full against the wind and twice full with the wind. The 3.5 loops run track was on and around the horse track. Sections with high or low grass, gravel, pavement and asphalt. Many turns and corners along the way.

Result: 20th out of 39 finished athletes 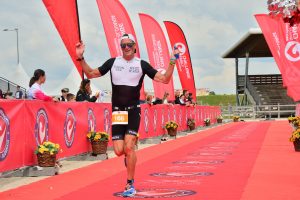 Swim: swimming against the current and wind was tough and the current was a lot stronger than the 1.5 weeks I was training in Samorin before the race. Still, I was able to overtake some athletes and in the last part the current was pushing us to the swim exit which was nice. Those last few hundred meters I was swimming just above 1:30/100m 🙂 My swim resulted in the 19th position, a top 50% result.

Bike: the bike ride was very windy! Since the majority of the ride was on the highway the road conditions were really good. Of the 4x 20 km stretches on the highway, 2 were full against the wind and 2 were with the wind. Certainly against the wind it was very tough and 20 km is a long way and felt my calves starting to cramp up a few times. My average power was 223 Watt. My bike ride resulted in the 21th position, just outside a top 50% result.

Run: almost directly after changing from bike to run, I suffered from cramping up my upper legs for about 1.5 km. After that the cramping feeling wasn’t as painful anymore and I had a good run. The last few kilometers I managed to squeeze out an end sprint to the finish line. My run resulted in the 14th position, a top 36% result.

Total: a tough swim in the river against the current, the bike ride was tough going against the wind and the run was in the end actually quite good. Pretty happy with my performance in this first World Championship triathlon race! Finished: place 20, which is just outside a top 50% result. 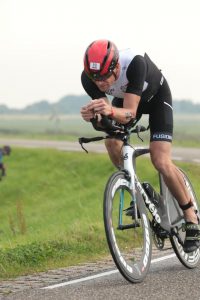 The swim was in the Markermeer lake and it can storm there as well. On the race day it wasn’t too bad but there were some nasty waves out there. The first section of the bike route went through the open, unprotected from the wind, polders and the second section was on the dike back to the town Hoorn. All flat but in Holland we sometimes say that the wind is our mountain 😉 The 4-loop run was through the city center and city park and besides from a few canal bridges it was all flat.

Result: 23rd out of 104 finished athletes 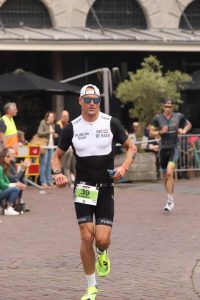 Swim: the swim was tough the moment we passed the harbor wave breakers and were exposed to the waves of the Markermeer. It was sometimes difficult to sight the buoys but also there weren’t any clearly marked buoys for guidance. After the turn around buoy, the swell was pushing to the swim exit. By my surprise I had a pretty good swim time considering the conditions! My swim resulted in the 11th position, just outside a top 10% result.

Bike: the bike route was through quite open terrain and exposed to the wind. The first section however went through a few villages and the wind from behind didn’t make a huge difference. Unfortunately, I couldn’t keep my nutrition in and I was losing energy quickly. Especially on the dike back toward Hoorn it was tough with the wind against us. On average I managed to push 224 Watt. My bike ride resulted in the 12th position, just outside a top 10% result.

Run: Because I lost a lot of energy on the bike, the run was going to be very tough. No energy and I thought about stopping several times. But my family and some friends were along the run course and cheering, so I just couldn’t stop and had to continue. Even with vomiting twice… Every loop became tougher and tougher. A dramatic result for the half marathon of over 2 hours. My run resulted in the 66th position, only 1/3rd was even slower than me on the run.

Total: during the swim I didn’t think it went well, but looking back the swim time was actually quite good! The bike ride started well but due to the problem with my nutrition and losing energy, it became harder and harder. The bike time and result are still quite good but the run afterwards was terrible. No energy left, vomiting and having to walk instead of running… Finished: place 23, which is a top 25% result.

No vacation to some kind of tropical island or a cruise to the Caribbean but a couple of months easy training and taking it easy. My knee injury was playing up since a few months and needed some time to heal. Just having fun, continue with my house renovation which slowly becoming nice and nicer. Planning to change a part of my garage into a gym where I can train in bad weather and have enough space for stretching, stability and core exercises.

Currently working offshore again and taking it a lot easier on the training. I’m training almost every single day for about an hour, but this is just to keep me mentally sane and trying to keep some condition. Training on board is reduced to workouts on the Wattbike, rowing machine, fighting with weights or elastic resistance bands and dry swimming with a swim elastic. Unfortunately, the treadmill is broken.

I’m still formalizing the plans for 2022 but I have decided that I want to compete my first full Ironman in 2022. Because of my work, this will probably happen very late in the season since I can’t train that much and not consistent until summer starts.

I’m also looking at returning to the race where I did my first real triathlon. It will be exactly 5 years after I became a triathlete; at least if you don’t count the try-out at the Olympic distance triathlon in Zeewolde in 2017 where I finished in about 2h45m… Luckily, times have changed 🙂 Soon I’ll write an update once all the plans have been confirmed!