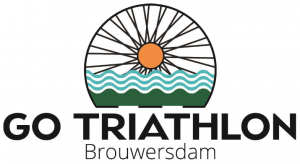 The Brouwersdam 90 triathlon race was organised for the first time and the location was at the Sailing and Surfing center Brouwersdam, about halfway the dam between the islands Goeree-Overflakkee and Schouwen-Duiveland in the southwest of Holland. The swimming would be conducted in the Grevelingen lake, the bike route was going over the dam and certainly one way would be quite windy! And the running was just a few laps going from the center to the south and back. 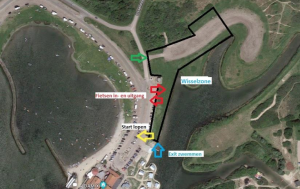 Specially for this race I had booked the accommodation that is next to the center. From my cabin I could see the water where I was going to swim in! The cabin was tiny but the location was perfect and I had no hassle on race day to get to the start in time. On race day was the bike checkin but it was possible pick up the start number, stickers and timing chip the evening before, so I could prepare everything without a race day rush.

A few months earlier, a friend (the friend that had challenged me to compete in the Ironman 70.3 Zell am See of 2017) and I had registered for this race, thinking it would be a good test to see where I was standing in my preparation for the Ironman 70.3 triathlon in Denmark. Normally the weather is quite nice in the last weekend of May in The Netherlands, but this year… It was cold and raining in the morning, actually so cold that I was really doubting whether I should start in this race! After a good warming up and trying to motivate each other, eating some more energy, it was time to head to the swim start. The concrete was ice cold, the water was also very cold… Because of the cold water, the race was luckily a wetsuit-legal race! 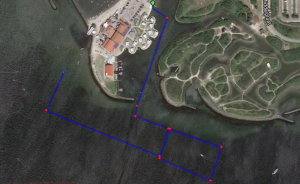 The swim start was divided in 3 groups of mass starts. The first group were the competition athletes (not me haha) and the other two groups were the amateurs. My friend and I started both in the last group at 09:20 hrs. The start line was an imaginary line between two buoys and the large group was floating in the water. At the start signal the group went off for the 1 km swim. After 19 minutes and 12 seconds, I came out of the water and ran to the transition area. This swim time was good for place 88 in my age group, place 259 overall. 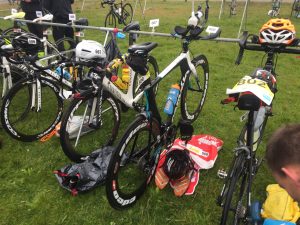 All the bike and run gear was at my bike nicely organised so no hassle with transition bags etc. Taking off my wetsuit, putting on my helmet and run with the bike to the start bike line. I had trained the flying mount a few times just before this race, and this would be my first flying mount mounting in a race… But everything went well and I was quickly on my bike, cycling south. My transition only took 2 minutes and 1 seconds so pretty good I’d say! 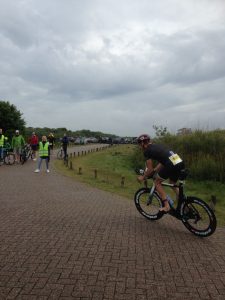 After leaving the transition zone the first section would be leading us to the island Schouwen-Duiveland, on the lee side of the dam, a turn and tunnel through the dike and then on top of the dam to the island Goeree-Overflakkee. We knew that if the wind would be coming from the north, the part of the bike route that is on top of the dam would be long and quite exhausting! The top of the dam is completely open, no protection against the wind whatsoever! After reaching the northern island, and a short detour, the route was going back on the lee side again to the start of the bike lap. Each bike lap was approx. 20 km. 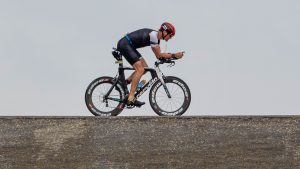 For the Brouwersdam 90 we had to complete 4 loops to come to the 79 bike route kilometers. Due to the air temperature and rain, in the beginning on the bike I was feeling very cold and wet (doh, coming out of the water!) and the first 2 loops I was shivering quite a lot. This wasn’t good for my energy preservation and was exhausting me quite a bit :/ But in loop 3 the sun slowly came through the clouds and in loop 4 I was getting a little bit warmer. 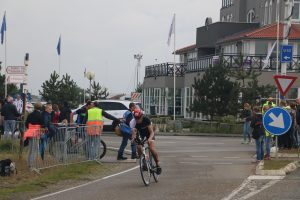 The interesting thing of multiple bike loops was that I could see the really fast bikers (from the competition group) overtake me. The speed difference was quite astonishing, although I saw quite a few cycling in a bike-train and that results in a lot higher speed. My bike time wasn’t bad though! I completed the 79 km bike route in 2 hours 18 minutes and 05 seconds. Certainly considering the wind, weather conditions and a few tight corners in the route. Place 70 in my age group and place 214 overall. 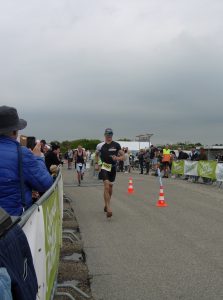 After racking my bike in the transition zone at the Sailing and Surfing center Brouwersdam, and slipping into my running shoes (I did my first flying dismount successfully as well!) I was off on the run track. My T2 bike to run transition took exactly as long as my T1: 2 minutes and 1 seconds. From the transition zone, the route was to the southwest but the surface of the route was not great. Partly normal street pavement but also more a cross country track route with a lot of uneven surface where you had to be careful not to twist your ankles! The two loops making a total of 10 km, took me for loop one 24 minutes 17 seconds, and loop two 23 minutes 55 seconds. Total of 48 minutes and 11 seconds for the 10k run. This resulted in place 69 in my age group and place 192 overall for the run. 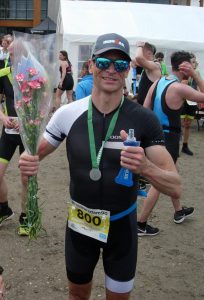 Crossing the finish line in a total of 3 hours 29 minutes and 28 seconds. The final result in my age group was place 63 of 171, and overall place 182 of 520 athletes. This race was good test to see how I was doing, with of course a lot of points to improve 🙂 After the race I met my parents that were watching the race and my competing friend and his wife, and we had something to eat and drink in the center. I had one more night in the cabin and drove back home the following day. 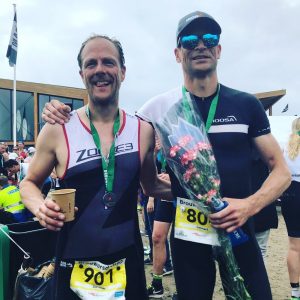 Not even 3 weeks later, and just over 1 week before the next race, I took the ferry from Germany to Denmark. Drove north, past Kopenhagen on to Helsingor, the home of the Ironman 70.3 Elsinore race! In these 3 weeks, I still had a couple of strong double brick trainings (bike, run, bike, run) and swim lessons and many swim sessions. And of course lots of run trainings with intervals, progressive runs, endurance runs and before breakfast runs. Next to all the training, I had some time for relaxing, sightseeing and laying on the beach.

Read my triathlon adventures in Denmark in the next post…