It has been a good and high performance summer already and my main race of 2019 was yet to come: Ironman 70.3 Vichy France!

After the interruptions in my training schedule for Vichy with the shorter distances races of 1/8 Terriers tri, Ironman 5150 West-Friesland and Olympic Distance of London Westminster, it was time to intensify the trainings and get ready for my next race which would be within 4 weeks time!

Still in London the morning after the race, and it was time to loosen up the legs with a short recovery run. Just along the Royal Victoria Docks where the swim and run sections were yesterday and a little bit the other direction but there were too many cars and road crossings. After the run and packing the last item in my bike case and backpack, I went to St Pancras train station to catch the international Eurostar train directly to Amsterdam. No stopover or changing trains, a quick ride back to Holland. In Amsterdam, switching trains and arriving in the late afternoon at home!

The next day the start of the trainings program for Vichy had begun. About 3.5 km swim session and 2.5 hours low Hr bike ride. Low Hr bike training but still averaging 33.4 kmh! Something is going well! 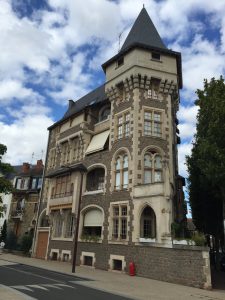 I won’t write all my trainings down of the next 3.5 weeks but I had some interesting trainings. Every week I would have a double brick training: bike, run, bike, run. Without stopping for long, just changing shoes like you’d do in a real transition of a race. Sometimes a quick toilet break or filling up the drink bottle for the second bike ride of the brick training. These brick trainings were not the same every time. The week after London, my bike rides were 1.5 hours and run 45 minutes but the week thereafter was already 2.5 hours bike ride and 1 hour running. Yes, my coach knew I didn’t had to work these weeks and thought I would be bored otherwise, so he kept me quite busy! 😉

Most of my swim sessions were in open water in a nearby lake. Ideal for training open water triathlon swims although there are some small boats at the edges sometimes that you’ll have to careful off. Once a week I had a swim session in the local indoor swimming pool for technique training. I have been improving the last couple of month but there is still a long road ahead to get where I’d like to be! In all my previous races, my swim times were just below average and that needs to change one day!

The programs for the running trainings were very diverse, from pre-breakfast (fasting) easy endurance runs, to long endurance, intervals and progressive runs. This makes it interesting, keeps me motivated and happy and it improves my overall speed and endurance. 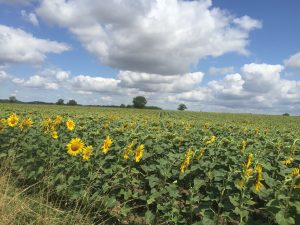 On Monday very early in the morning I drove from my home in The Netherlands to Vichy in France. Almost 2 weeks before the race so good in time and having possibility to explore the routes well. In the afternoon, after arriving at my first accommodation for the first week, I did an easy recovery run to loosen up the legs from the drive. I had booked two apartments just outside the busy center of Vichy; one for the first week and the second for the week of the race. I had booked the race week apartment first and later decided that I wanted to be in Vichy earlier, so I booked the first week apartment. The apartment for the first week was spacious, had an outdoor sitting area, a large bedroom and a sitting room/kitchen. More than enough space for me!

The second apartment was actually just a few hundred meters away so that was easy to move between. That apartment had even more space. Large sitting area with a large kitchen, good bathroom and bedroom and a garden with chairs and a table for the moments that I wanted to enjoy the sun. 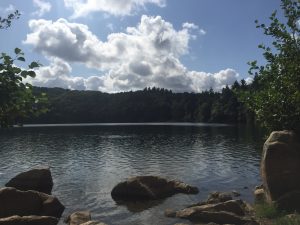 The day after arriving in Vichy, I found out that it was not allowed to swim in the Allier river until race day so I had to find another swim area. That sounds easy, especially since I though that France would have a lot of lakes in this area but finally with help of the Tourist Office, I was directed to an old volcano lake: Gour de Tazenat! The drive was very nice, going over B-roads, through little villages and after about 30 minutes arriving at a parking place. It’s not the typical volcano that you can see from a long distance away; this one is over 29.000 years old and probably because of erosion not sticking high into the sky anymore. 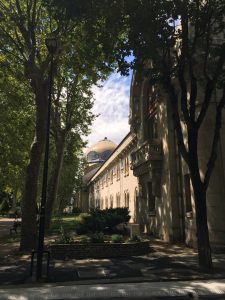 The swim session in the volcano lake went well and the plan for the afternoon was to explore the 90 km bike route. It was great to have the possibility to explore the Ironman 70.3 route. The route consists out of 2 loops: one shorter loop of about 30 km counter-clockwise and one longer loop on which you have to conquer the real climbs. I had imported the route into my Garmin Edge 520 bike computer and could follow the directions quite easily. The route was interesting although I had expected something else when I had registered for this race many months ago! The previous years the IM 70.3 Vichy bike route was mostly flat and high speed. This year they had changed the whole route and there were a lot more height meters to conquer. Not that I’m complain, I’m pretty good in these kind of terrains but my idea for the triathlons in 2019 was to race on more flatter courses compared to the Austrian, Swiss and Slovenian Alps I’ve been racing the last two years. The IM 70.3 Elsinore race was not completely flat but had a lot less height meters than Vichy!

During the trainings ride of the IM 70.3 bike route, I found out that a section was blocked due to a slide that had covered the whole road over a few hundred meters. There was a way around but this detour was over narrow backcountry roads with a lot of climbing! There was no indication how long the road block would take and the race was only 1.5 weeks away… 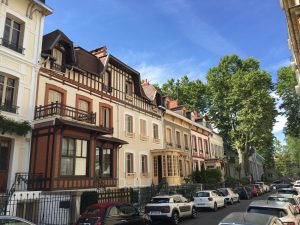 The next few days I still had a few good trainings and then from the weekend onwards it was getting a lot easier. Less intensive, more relaxing, and trying to get my body in the best state for the race possible!

The air temperature was getting quite warm in France but the organisation had plenty of nutrition posts along the bike and running routes. The water temperature was pretty warm for some weeks already (and that was the reason that nobody was allowed to swim in the Allier river) but it was still just below the max for the wetsuit-legal limit.

Since this weekend was the race for the Ironman 70.3 Vichy and the full distance Ironman Vichy, the organisation had shifted everything a bit forward. The registration was opened on Thursday and I received my Ironman 70.3 Vichy backpack, and the necessary items for the race: start number, number stickers, swim cap and transition bags. 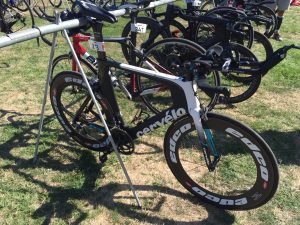 The bike check-in was on Friday afternoon so I could prepared everything in time. On Friday during the bike check-in, the temperature was hot, and many were emptying their bike tires so they wouldn’t blow up. During bike check-in you also had to check-in the blue (bike) bag, and red (run) bag and there would be no access to them on race day anymore! This was new to me and meant I had to prepare the nutrition bottles, running shoes and everything else instead of taking the last items with me on race day.

After the check-in of the bike and bags, everything was set and ready for tomorrow: race day Ironman 70.3 Vichy 2019!